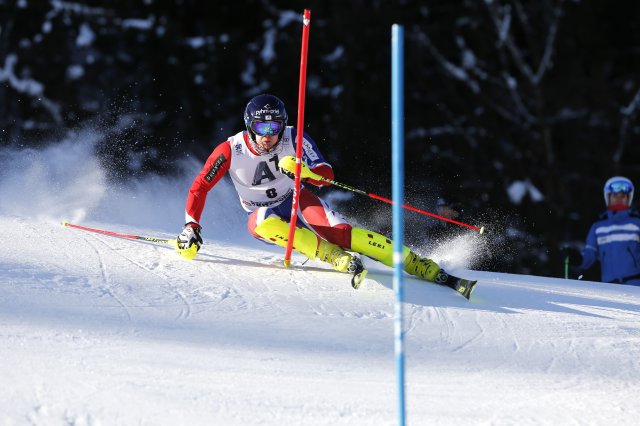 GO SKI GO BOARD: So why did you start skiing and how did you get into racing?

Dave: When I was six years old my father Carl and mother Shirley, encouraged me to take lessons at the local dry ski slopes near our home, giving me the incentive of coming away with them on the family ski holiday when I could ski – so I joined Pendle Ski Club. By the age of eight, I was whizzing down the slopes at the French Alps resort of Samoëns. I loved it. I was always the first back on the lifts to go down again. Back on the dry slope at Pendle I progressed into skiing racing – and from then on I was hooked.

GO SKI GO BOARD: How did you go from skiing at Pendle Dry Slope to ski racing on the World Cup circuit?

Dave: After being picked for the English Schools Team, I got into the England Ski team and took part in the English and British Championships. After I had completed my A levels, whilst continuing to ski race with the British Development Team, I was picked for the British Team as a senior. In January 2010 I was proud to be selected to represent Great Britain as part of Team GB in the Vancouver 2010 Winter Olympics. I finished 27th in the Slalom and 47th in the Giant Slalom.

Since then I have focused solely on the discipline of Slalom, competing on the Europa Cup and then World Cup circuits. 2014 saw me selected to my 2nd Winter Olympics Games in Sochi to represent Team GB and was happy to improve my performance to 17th in Slalom. I have worked really hard on both my fitness and technical skills, both of which played a big part in my 2nd place finish in the Slalom World Cup in Kitzbuhel last season. Although I am proud of that achievement, I am now completely focused on the season ahead, including the 2018 Winter Olympics.

GO SKI GO BOARD: What would you say to a young skier who wanted to follow their ski racing dreams?

Dave: Do it! Seriously, with the support we have within British skiing now, and the clear pathway from starting ski racing to becoming part of one of the national squads, anything is possible.

If you want to achieve that dream, the most important thing is that you have to put in the hard work. Being a professional alpine ski racer certainly isn't easy and isn't as glamorous as it looks. It is all about putting in hours of hard work both on snow and also in the gym, as well as spending lots of time in vans travelling from resort to resort. Saying all that, there is nothing better than standing on the top of the mountain when the sun is rising and the feeling of making a turn at high speed in front of a crowd cheering you on.